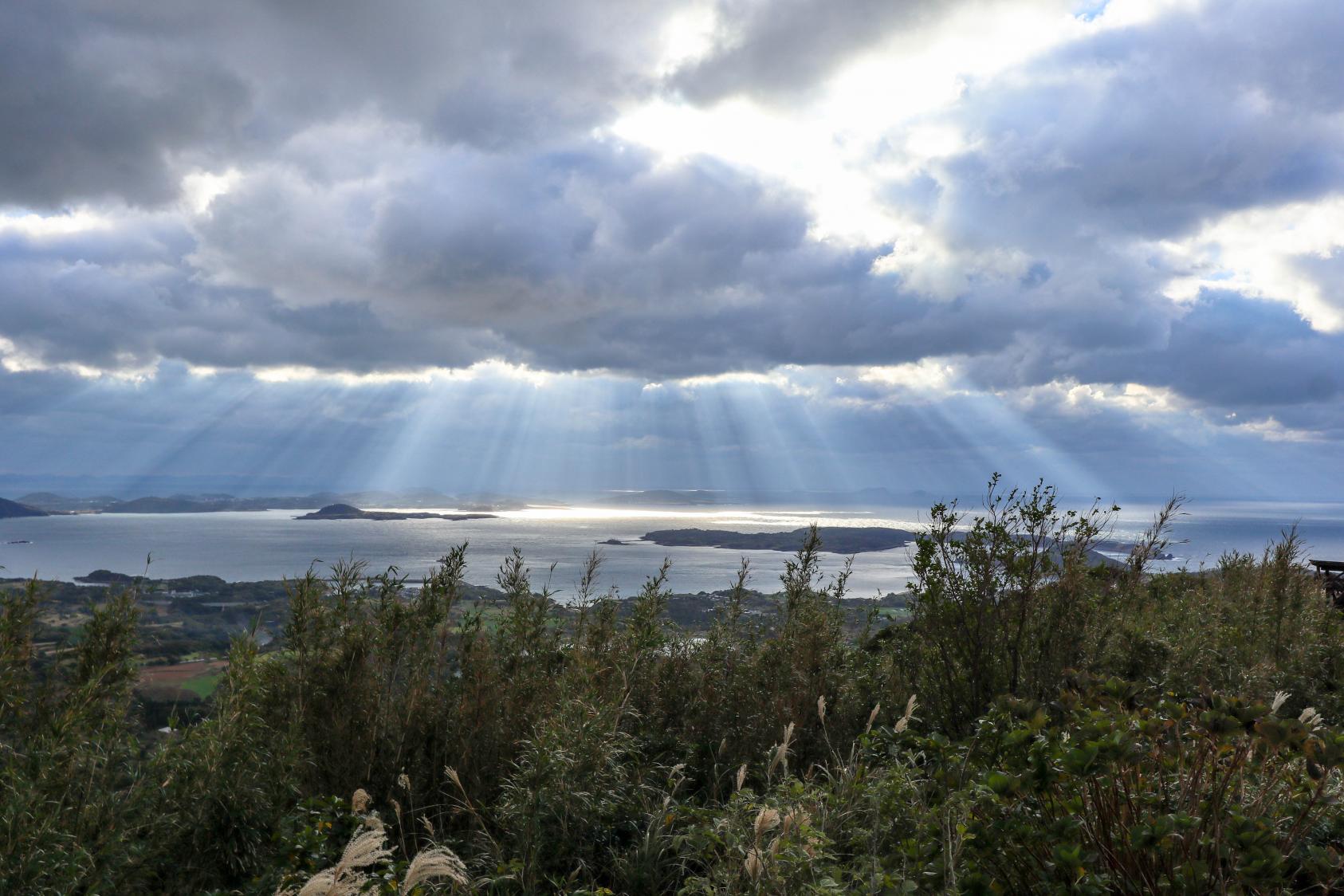 Uku Island was formed by the volcanic eruption of Mt. Shirogatake. This island is the northernmost island of all the Goto Islands, and it is also the biggest among the surrounding islands. A long time ago, it had been very wealthy and prosperous thanks to trades with China and Korea, but today, there are less than 2000 residents who live on the Island. With a rich local heritage, a lovely and diverse nature, as well as cordial inhabitants; it was certainly for us an unexpected discovery throughout our tour around Nagasaki Prefecture.

What you can do in Uku Island

The expansion of the island is due to a commander named “Taira No Iemori”, who thereafter gave his name “Taira” to the biggest fishing port on the island. The Taira clan was defeated during a sea battle that marked the beginning of the Shogun era in Japan. To get away from his enemies, Taira No Iemori fled away with a small group and then hid his ship at one of the creeks in Uku. Having succeeded to escape, he decided to settle down on the island, and later became an essential figure to Uku's history. Later, he was known as Uku lemori, and he had a great influence on Goto Island's unification.

The port of Taira is the most developed area with the one and only hotel on the island. We really enjoyed walking across the quiet port of Taira, especially with the different sceneries such as fishing ports, Buddhist temples, small Shinto shrines, and children playing at the main square. The port's main highway used to be a beach in the past where the locals would carry back the whales from their hunting trip. Whale hunting played an essential role in the economic life of Uku Island because the islanders were able to feed their family and to make clothes from it. However, this practice of whale hunting died out a very long time ago, and nowadays it is just a part of the local heritage. The locals were grateful to the whales, so they decided to honor them by building a shrine named “Kojima Shrine” at the center of Taira. Now, Kojima Shrine is the starting point of a summer festival called Gion-Matsuri which is held in July. Eponym of the well-known Kyoto's festival, the one that takes place on Uku is surely smaller, but none the less important! Eight men carrying a 400kg portable shrine on their shoulders and running around the town for a whole day. After walking for just a few minutes, you can imagine how difficult it must be for the runners to go up and down those hills.

It will take you about forty minutes by car to go around Uku Island; however, bicycling is the best way to discover the island, especially when the weather is right. The island is relatively flat with gentle slopes, but in order to effortlessly explore all the roads, you can rent electric bicycles from Uku 's Tourism Office. Apart from the two fishing ports (Taira and Konoura), most of the island is occupied by nature, so it really makes you feel very relaxed. At the southern part of the island, you can ride your bike along the 3km-long seaside road. The road is wide enough for cars, but we highly recommend cycling instead. The air is pure, and the time seems to disappear quickly. While cycling, we came across small farms where the cows were raised in an open area; their meat is much appreciated for their notable tenderness.
This Island has beautiful beaches, such as Suge-hama, and O-hama which are the primary ones. The absolute blue emerald water is clear and translucent, making this island a “must-go” place for those that enjoy swimming, snorkeling, fishing, or even just to take some Instagram-worthy pictures! The palm trees running along the Suge-hama beach made us feel like we were on a tropical island, whereas in the north, the atmosphere of the coast was completely different - the wind was stronger, the sea was rough, and the waves continuously slammed on the rocks. We did however appreciate this contrast from the two areas, as they were wildly different.

Mt. Shirogatake, which is located at the center of the island, offers a lovely overview of Uku Island, and it is also the ideal spot to admire the sunset. At the top, small Buddhist altars embedded makes this area quite mysterious looking. You can go to the top by car, or take a walk via the hiking trail.
Uku Island has so many charms, one of which is its residents who are so friendly and willing to share everything. Of course, the island offers a wide range of activities and experiences throughout the year, i.e., line fishing, rice planting, rice harvesting, making an object with a bamboo tool and many more. During our trip, we took part in making Kankoro-mochi, which is a moist rice cake mixed with dried sweet potatoes, a local specialty much appreciated in this region. For about two hours, we had the pleasure of learning how to make Kankoro-mochi with the experts. Then, our teacher invited us to taste the mochi that we had just prepared.... a real delight! We really enjoyed these moments of exchange as well as their hospitality.

As we mentioned before, the island has just a single hotel, but it also has more than twenty guesthouses that welcome anyone that want to discover or experience Japanese authentic island lifestyle. Uku Island has so much to offer than just its history and culture, and this is definitely a place where you would have to go and see it for yourself!