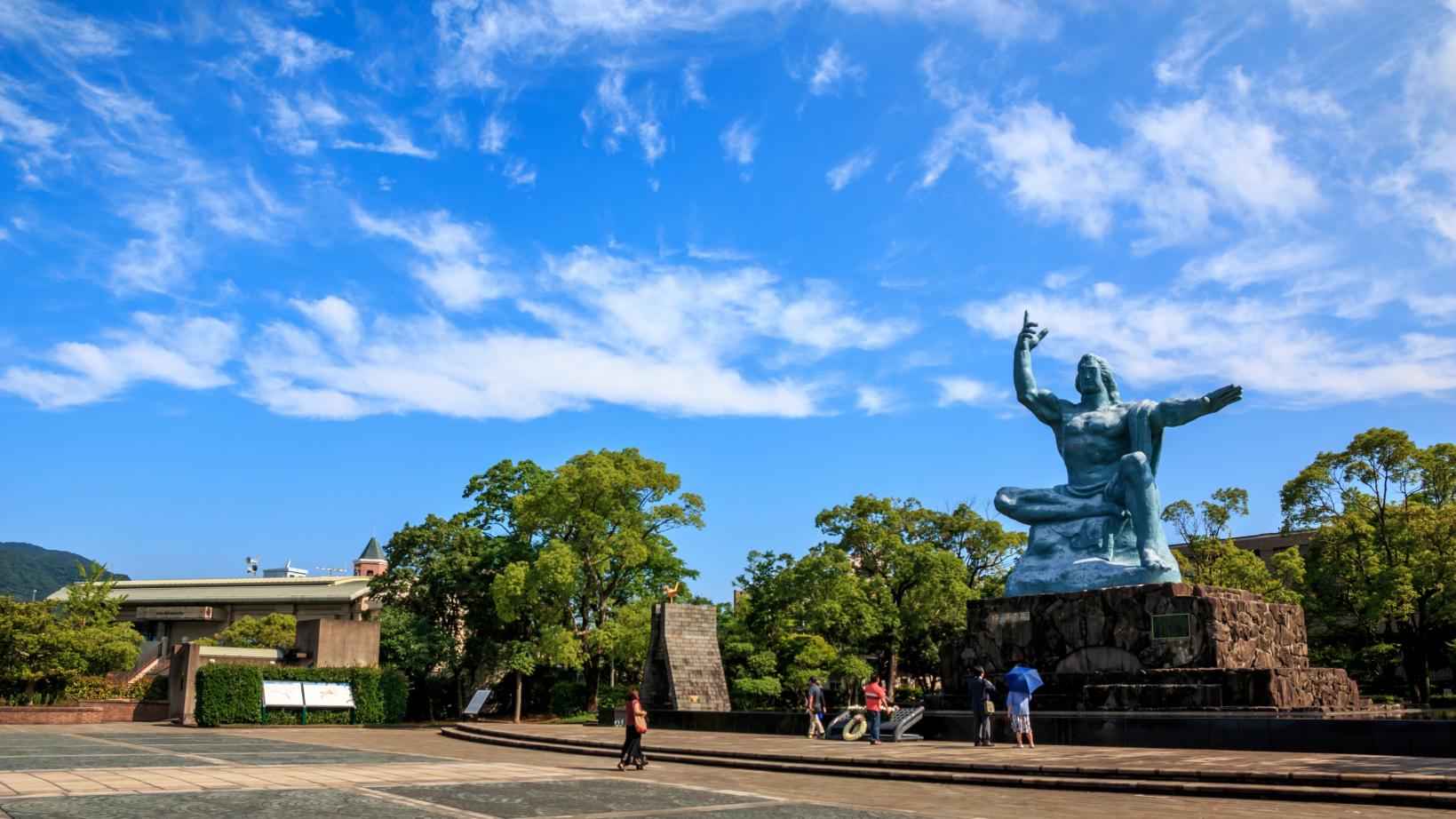 Nagasaki Prefecture is located on the western coast of Kyushu, southwest region of Japan. The prefecture consists of the mainland, and also hundreds of islands that dot its coastline. Being on the west coast and surrounded by ocean and mountains, Nagasaki is well-known for its stunning sunset view over the turquoise ocean; its slow-paste island paradise; and its pride for having the most variety of fresh seafood in all of Japan.

Historically, Nagasaki Prefecture played a very important role in Japan’s international relations. During the Edo period, Japan closed its borders and started its 214 years of national isolation between 1639 – 1853. During this time, Nagasaki was the only port that permitted foreign trade. As such, a vast amount of culture, knowledge and food from Asia and Europe flowed to and from Japan via Nagasaki, which contributed greatly to the modernization of Japan. Today, many of the influences from that period such as food, architectures, festivals, and culture can still be seen throughout the prefecture today.

Nagasaki Prefecture has survived many tragic events such as the persecution of Christians during the Edo period; the eruption of Mt. Unzen, which was the deadliest volcanic eruption recorded in Japanese history; and the atomic bombing of Nagasaki City in World War II.  Having to overcome and rebuild from these heartbreaking events, Nagasaki now thrives as an international city with the mission to send and promote world peace. In addition, during the World Night View Summit in 2012, Nagasaki City was recognized as one of the “World’s Top 3 Night View” alongside Hong Kong and Monaco.

Nagasaki Prefecture played a major role in the history of Japan, and often it was the setting of many significant historical events in the Japanese history. From being the frontline defense of the Mongol Invasion in the late 1200s, to persevering the persecution of Christians during the Edo Period (1603-1868), and in the recent century, surviving the atomic bombing of Nagasaki City in 1945. Many historical sites have been well preserved to this day, and each site has its own intriguing story to share with all visitors. Whether you are a history-lover, or just a tourist that enjoys exploring Nagasaki Prefecture, the stories from each site will not disappoint.

Iki and Tsushima Island, located in Nagasaki Prefecture, are both listed in Chinese historical text called “The Sanguozhi” (also known as the “Records of the Three Kingdoms”) as the oldest Japanese kingdoms that communicated with China.

In the late 1200s, the Mongol Empire lead by Kublai Khan had already conquered countries like China and Korea, and Japan was next on its list. The Mongol invasions of Japan started in 1274 when the Mongols sent approximately 900 ships to the island of Iki and Tsushima. Although the Japanese warriors were outnumbered by the Mongols, the samurai on Tsushima and Iki Island put up a tough fight before it was inevitably defeated by the large Mongol forces.

During the Age of Exploration, a wave of Western civilization swept over Japan. It began in 1550 when the first Portuguese ship to visit Japan arrived in Hirado, and since then the people of Nagasaki came into contact with Europeans. Missionaries from Spain and Portugal arrived in Nagasaki in hopes to spread Christianity, and the region became one of the main centers of this missionary work. A Daimyo (feudal lord) in Omura became Japan’s first Christian Daimyo, and dispatched four young Japanese men as ambassadors to visit the Pope in 1582. Many churches were built in Nagasaki after that and the Christian culture flourished here to such an extent that the city earned the nickname “Little Rome”.

However, in 1587, Japan’s most powerful daimyo “Hideyoshi Toyotomi” was afraid that Japan would be conquered, and thus issued an edict expelling missionaries. In 1597, twenty-six Christians including Spaniards, Italians and Japanese were arrested in Kyoto and Osaka, and they were forced to walk all the way to Nagasaki to be crucified at Nishizaka Hill. The martyrs were later beatified in 1627, and canonized by the Pope in 1862.

However, the religious ban initiated by Toyotomi was soon expanded, and all churches were destroyed. In replacement, more Japanese temples (tera) were built in a part of downtown Nagasaki later named Tera-machi. Large numbers of missionaries and Japanese Christians were martyred, including French and Filipino missionaries executed at Nishizaka Hill, and many Japanese laymen were killed at Unzen Hell. At Hara Castle where many Christians lived, about 37,000 peasants lost their lives in the revolt known as the Shimabara Rebellion.
Eventually, in the 1630s, the third Tokugawa Shogun issued a series of edicts and started the ‘Sakoku’ policy of national isolation. Under this policy, Japanese people were not allowed to leave the country and all trade from abroad was strictly banned except for at a single place: a man-made island in Nagasaki Port called “Dejima”. This artificial island housed the Japanese trading post for the Dutch East India Company.

For the next 214 years, Nagasaki became Japan’s only open window to the west,  and the center of international exchange for the whole of Japan. Various goods including porcelain and other exotic Japanese cultural items were exported from Nagasaki. Meanwhile, ambitious young people and samurai came to Nagasaki from all parts of Japan to acquire new knowledge in the fields of medicine, astronomy and chemistry, laying a foundation for the modernization of Nagasaki and Japan as a whole.

In 1792, the volcanic eruption of Mt. Unzen (located in the Shimabara Peninsula) triggered a landslide at the nearby Mt. Mayuyama. The landslide swept through the city before it reached the Ariake Sea, which then caused a devastating tsunami that killed around 15,000 people. This was one of the deadliest volcanic eruption recorded in Japan. To this day, the visible landslide scar can still be seen on Mt. Mayuyama.

Although Nagasaki’s role as Japan’s sole trading port ended with opening of the country to the world in 1853, it took on a new role as the starting point of the modernization of Japan. Nagasaki was opened to free trade with foreign countries, and merchants of various nationalities including Dutch, British, French, German, American, Italian, Spanish, Russian, Portuguese, Swedish, and Swiss flocked to the city and enjoyed interacting with the people of Nagasaki. The Japanese people fell in love with Western industry and culture, and the new arrivals from overseas fell in love with Nagasaki. The romance of this time is depicted in Puccini's opera “Madame Butterfly”. The successful merchants built Western-style mansions, some of which still stand at their original sites and convey the romantic atmosphere of the 19th century. One such site is Glover Garden, named after Thomas Glover, a successful Scottish merchant who developed a variety of enterprises ranging across trading, shipbuilding in collaboration with Mitsubishi, and coalmining on islands near to Nagasaki Port. Glover’s coalmining island Takashima, the Mitsubishi-operated Hashima coalmine (also known as Gunkanjima or Battleship Island), and other islands around Nagasaki Port had all played a key role in fuelling the modern industrialization of Japan.

Glover also supported the Meiji Restoration by selling weapons to young samurai as well as helping them to study abroad. One of these young men would later become the first prime minister of Japan following the eventual end of the samurai era. The Glover House is the oldest example of Western-style wooden architecture existing in Japan. The Unzen area also became one of the most popular holiday resorts for Westerners visiting Eastern Asia at that time. Pearl S. Buck and Helen Adams Keller also visited and enjoyed the natural beauty of Unzen.

On August 9th 1945, as World War II was coming to an end, Nagasaki became the second and last target for atomic bombing. The lives of some 73,884 people were lost, and another 74,909 were injured. The people of Nagasaki united for the recovery of the city and the restoration of its surrounding nature. Today, this beautiful city has been recognized as one of the best night views in the world.

Today, the Nagasaki Atomic Bomb Museum alongside Peace Park, Hypocenter Park, and the Nagasaki National Peace Memorial Hall are some of the most important sites in the city that help people learn about the tragic event of the atomic bombing, and to promote a world free of nuclear weapons. In addition to the symbolic Peace Statue located in Peace Park, the park is full of art works donated by countries all over the world in support f Nagasaki’s prayer for peace.

Throughout its long history, Nagasaki has experienced many significant historical events such as being the front-line defence for Japan; embracing cross-cultural interaction and the influx of modern technology; and recovering from a series of tragic events. It’s not an exaggeration to say that every site in the prefecture has an intriguing story to tell. Moreover, the friendly and welcoming people of Nagasaki will warm your heart with their hospitality while they proudly share their culture, food, and stories with you.

Foreign goods which spread from Nagasaki to the rest of Japan

Technology
■Japan’s first steam ship, the “Kankoumaru”
Presented to Japan by the Dutch government in 1855. A carefully-rebuilt version of the ship now offers sightseeing tours around Nagasaki Port.

■Japan’s first flying baloon
Flown in Nagasaki by the Russians in 1805.

■Japan’s first steam train
Thomas B. Glover demonstrated a running steam train to Japanese people for the first time in 1865.
■Japan’s oldest asphalt road
Located in Glover Garden.
■Japan’s oldest Western-style dock
The first Western-style ship repair facility in Japan, constructed by Thomas Glover and associates. The dolly and track system used to hoist ships up the slipway looked similar to Japanese abacuses, called “soroban”, and so this was also referred to as the “soroban dock”.
■Japan’s first professional cameraman
Hikoma Ueno
Some of Ueno’s photographs are exhibited at the Nagasaki Old Photograph Museum in Nagasaki City and in the online database presented by Nagasaki University Library.
■The first Christian text in Japanese
Printed in Nagasaki by Saint Maximilian Maria Kolbe, O.F.M. Conv.


Food
■Bread
A Portuguese ship brought the first bread to Japan via Hirado City in 1550.
■Beer
A British ship brought the first beer to Japan via Hirado City in 1613.
■Coffee
Japan’s first coffee was had in Dejima in the 17th century.
■Pasta Manufacture
In the 1880s, French priest Marc Marie de Rotz established a macaroni factory in Sotome, Nagasaki Prefecture. 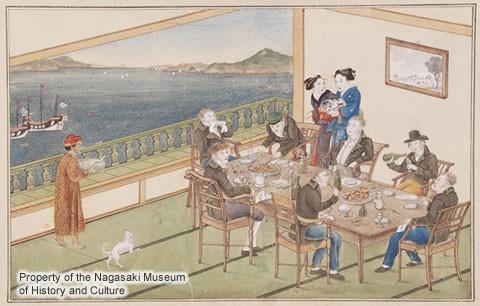 In 1863, “Jiyu-Tei” was opened in front of Irabayashi Shrine. The restaurant’s founder studied cooking skills under one of the Dutch residents of Dejima. Currently, the restaurant has been relocated to Glover Garden, and it operates as a coffee shop serving original coffee and castella cake.