A Pilgrimage Following the Tracks of Previous Papal Visits (1 Day)

In 2019, Pope Francis visited Japan, including Nagasaki, with "Protect All Life" as the theme of his tour, and Pope John Paul II also visited Nagasaki in 1981.
Use the Nagasaki tram system to travel around the central part of Nagasaki City, and to follow the tracks of both Popes.
Using a one-day tram ticket is recommended. 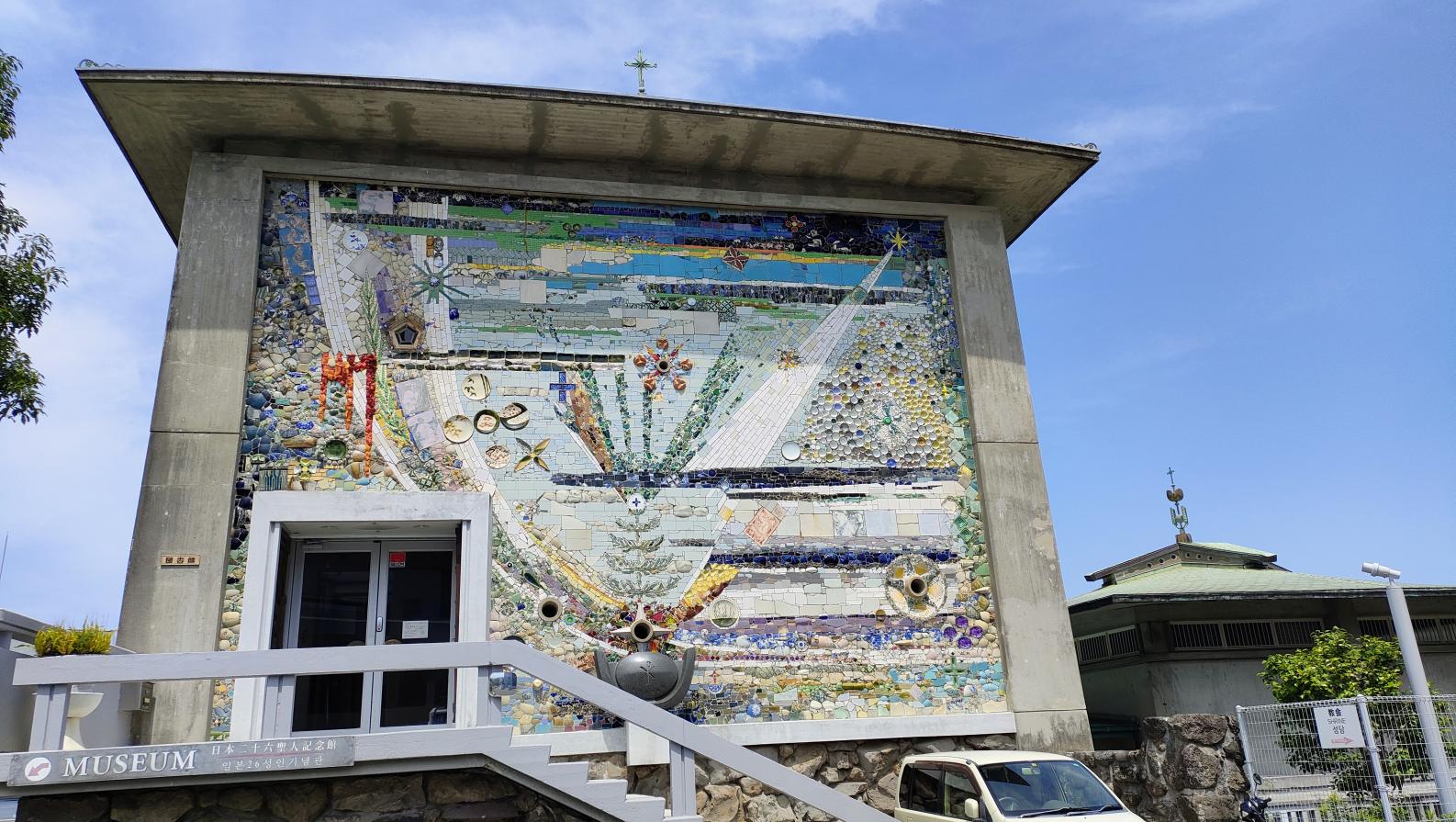 On February 5, 1597, twenty-six Catholics were executed here under the orders of Toyotomi Hideyoshi, marking the beginning of a two century long period of harsh Christian persecution in Japan. Today, this spot on Nishizaka Hill has been designated as a Japanese National Sanctuary. Pope St. John Paul II visited this site on February 26, 1981 as a pilgrim for the martyrs. Pope Francis also visited the Twenty-Six Martyrs Monument and the Twenty-Six Martyrs Museum on November 24, 2019.

The Twenty-Six Martyrs Museum
Behind the monument stands the Twenty-Six Martyrs Museum. At this museum, visitors can learn about the history of Christianity in Nagasaki - its rise, its prohibition, and its revival. A collection of items showcasing the lives of Christians as they hid from the authorities are on display here. These artifacts include the scroll Our Lady of the Snows (meticulously preserved by the faithful Hidden Christians in spite of the risk it posed), the "Maria Kannon" – a figurine shaped like the Buddhist Kannon used by Hidden Christians as the statue of Mary for worship, and personal belongings amongst others. There is also a collection of old maps and an original letter of St Francis Xavier's. A replica of the scroll of St. Mary of the Snows appears in the movie Silence. 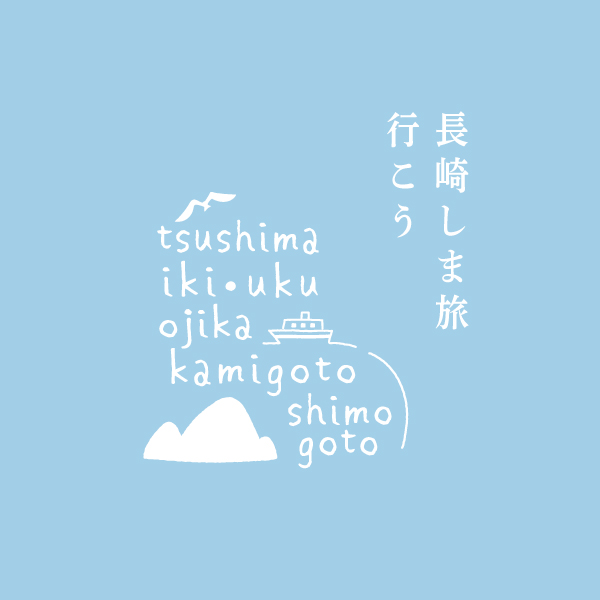 Oura Cathedral stands within the former Foreign Settlement established in Oura after Japan opened its ports to overseas trade. In 1862, Father Furet of the Paris Foreign Missions Society selected the location to construct the church for use as the base of the Society’s mission in Nagasaki.

Within the precincts of the cathedral, a parish house was built first in 1863, then the church building itself was built in 1864. It had a Gothic-style exterior with three belfries. The floor plan had three naves, and its façade had a building plaque just like Buddhist temples, reading ‘Tenshudo’ (literally meaning ‘church’). It was dedicated to the 26 Catholics who were martyred in Nagasaki in the 16th century and canonised in 1862. The building faces in the direction of Nishizaka, their martyrdom site.

In 1865, soon after the dedication ceremony, a dozen Hidden Christians from Urakami Village in Nagasaki visited the church, and one of them approached Father Petitjean saying ‘We are of one heart with you’, and revealed their secret faith. News of this dramatic event, which came to be called the ‘Discovery of Hidden Christians’, immediately reached the Hidden Christian communities in the Nagasaki region, encouraging their leaders to visit the missionaries at the church as well.

Such contact with the missionaries brought about a transitional phase of the Hidden Christian communities and prompted various reactions among them. Those who decided to receive guidance from the missionaries revealed their faith in public, although the ban on Christianity was still in effect. As a result, the Tokugawa Shogunate arrested the Hidden Christians in Urakami in 1867, and the Meiji Government which continued the Shogunate’s policy of banning Christianity exiled more than 3,000 of them to twenty domains throughout Japan and tortured them in order to make them recant their faith. This incident is called ‘Urakami Yonban Kuzure’. On the Goto Islands, those Hidden Christians who revealed their faith in public were captured (Goto Kuzure), and on Hisaka Island, as many as 200 Hidden Christians were thrown in a jail cell roughly 19.8 square meters in area, killing many of them (the Royanosako Martyrdom). The missionaries of Oura Cathedral addressed the consulates of Western countries represented in Japan to help stop these persecutions. The Meiji Government lifted the ban in 1873 in response to increasing criticism from western countries, eventually putting an end to the suppression of Christianity in Japan.

Following the lifting of the ban, the Hidden Christian communities split into three groups: those who decided to receive guidance from the missionaries and join the Catholic Church as their ancestors did in the 16th century, those who decided to continue their unique way of practising the faith that they had developed for two and a half centuries, and those who converted to Buddhism or Shinto.

The missionaries of the church gave full catechistical instruction to the former Hidden Christians, placing great importance on the catechism and specific terms in Portuguese and Latin that had been introduced by the Catholic mission in the 16th century and that the religious communities of Hidden Christians had, hitherto, transmitted from generation to generation by themselves. The missionaries made coloured engravings and other materials for the mission as well. At the same time, they also reintegrated the distinctive ways of the Hidden Christians into the more conventional rituals and customs of Catholicism.

The church building underwent extension work to deal with an increasing number of Catholics attending church services after the lifting of the ban, and in 1879 the scale and the appearance of the building took on the form that is seen today. Within its precincts, the Latin Seminary and the Catechist School were established for the purpose of training Japanese clergy. The Latin Seminary was constructed in 1875, and the Japanese graduates were sent to the remaining Hidden Christian communities following the first graduation ceremony in 1879. The Catechist School was established around 1883 in order to train catechists to give catechistical instruction in the remaining Hidden Christian villages, in place of missionaries, so that it was easier to visit these villages scattered throughout such a large area. Many Japanese catechists graduated from the school, and until 1892 were sent to the Nagasaki region to carry out their missionary work. The Latin Seminary and the Catechist School provided the driving forces encouraging Hidden Christians to rejoin the Catholic Church during this transitional phase. 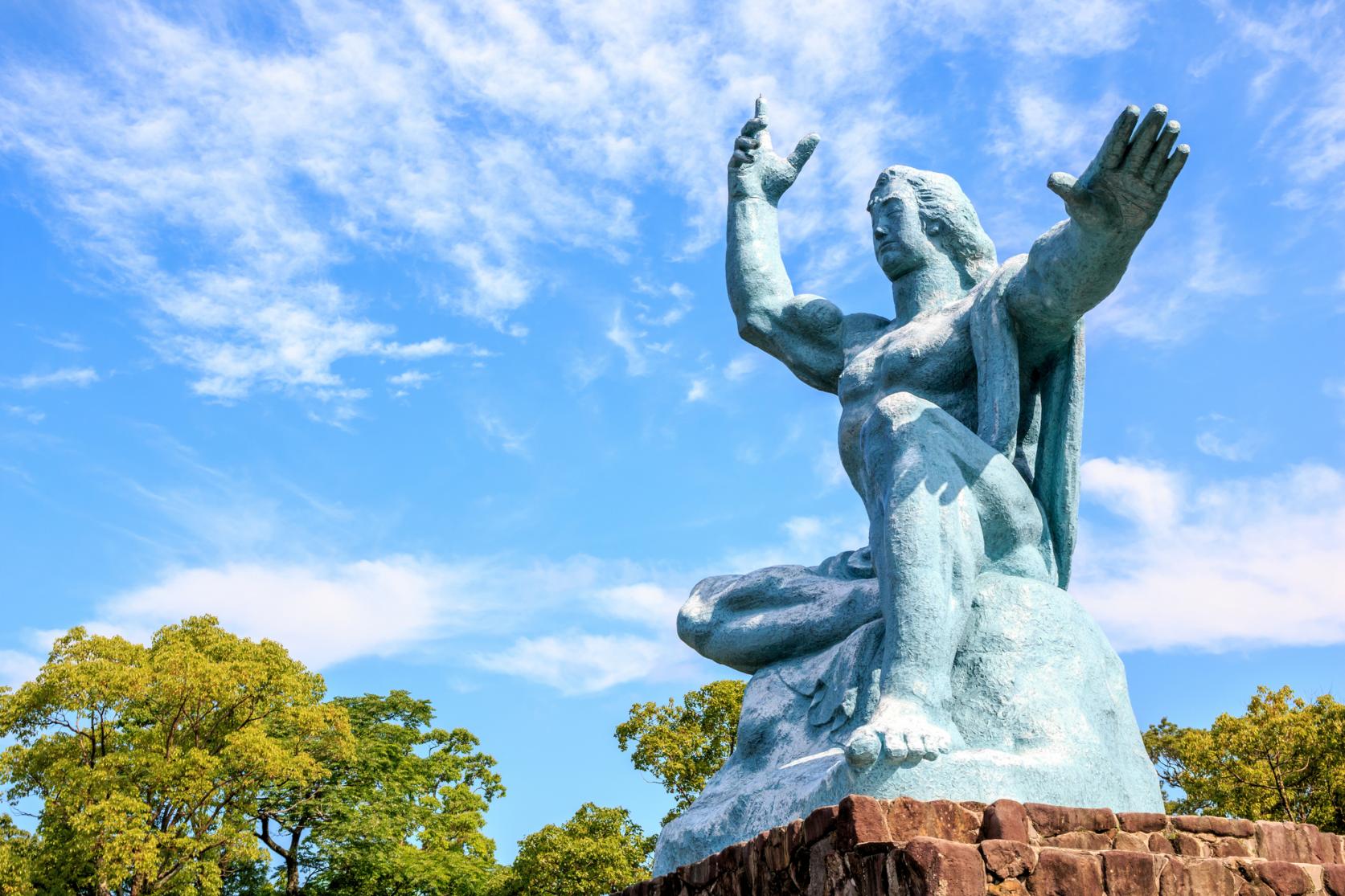 Nagasaki Peace Park is built on a low hill to the north of the hypocenter of the atomic bomb blast. It was created to represent the wish for world peace and a vow that such a tragic war would never be repeated. The park features the 9.7-meter-high Peace Statue symbolizing the Nagasaki citizens' wish for peace. Sculptor Seibou Kitamura, a Nagasaki native, created this statue as a symbol of the divine love and mercy of Buddha. The raised right hand points to the heavens to signify the threat of atomic weapons while the left arm is raised horizontally to represent the wish for peace. The figure's eyes are lightly closed in prayer for the souls of the atomic bomb victims. Every year on August 9, the anniversary of the atomic bombing, a peace memorial ceremony is conducted in front of this statue and a peace declaration is made to the people of the world. The park also features the Fountain of Peace, which was built in remembrance of a little girl who wandered in search of water. Visitors can also view a row of monuments contributed by various nations that form the zone of symbols of world peace.

Ground Zero of the Atomic Bombing in Nagasaki 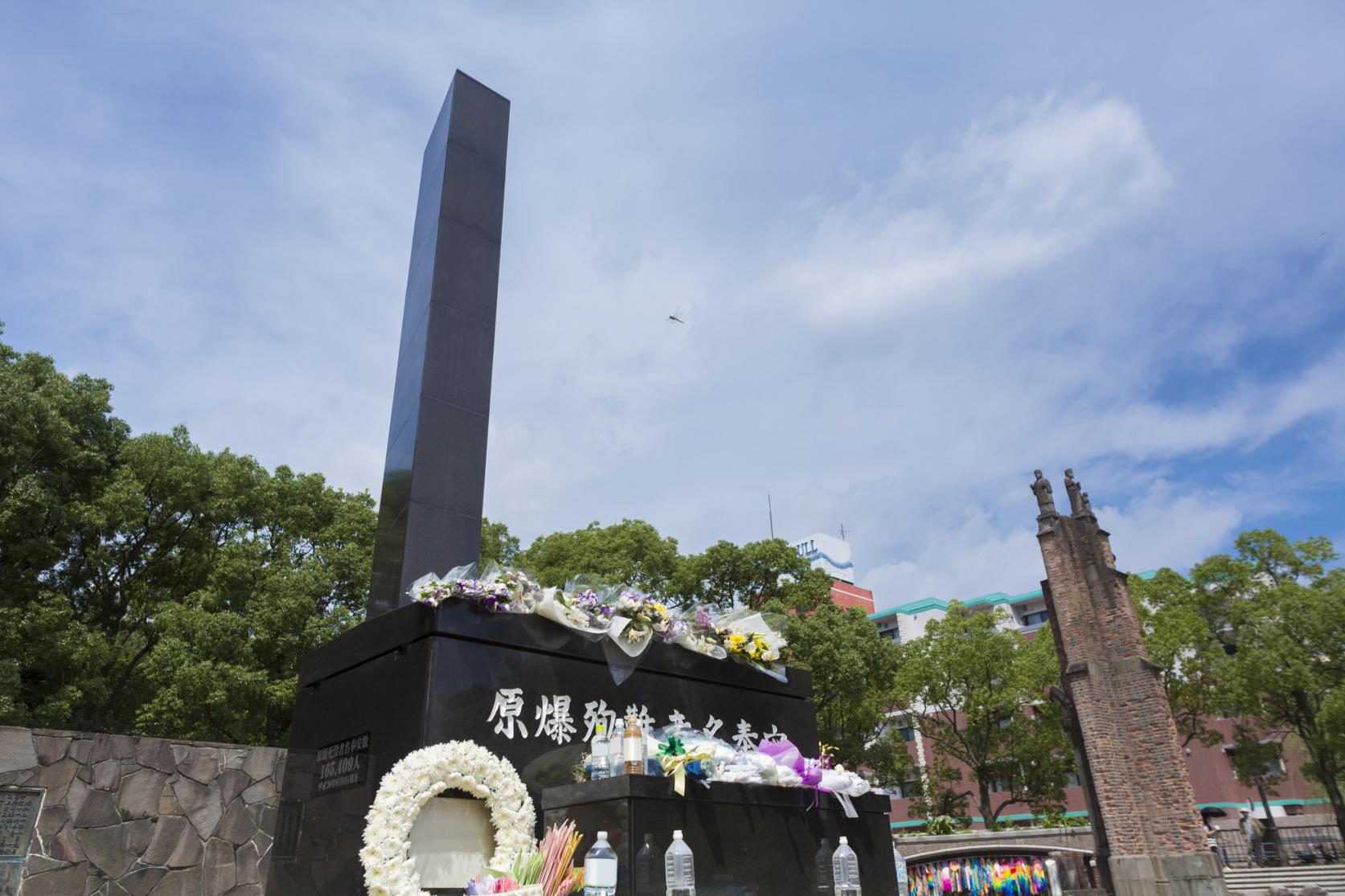 On August 9th, 1945, an atomic bomb detonated 500 meters above Matsuyama in Nagasaki City at 11:02am. The area within a 2.5 kilometer radius of the hypocenter was utterly devastated, and the rest of the city was left in ruins. After the bombing, which destroyed all plant life around the hypocenter, people said that no plants would grow there for the next 75 years. However, one month after the atomic bombing, about 30 kinds of plants started to grow again. Today, there are about 500 cherry blossom trees in the Hypocenter Park, as well as flowers and lush greenery that can be seen throughout the year. It truly captures the power of revival. 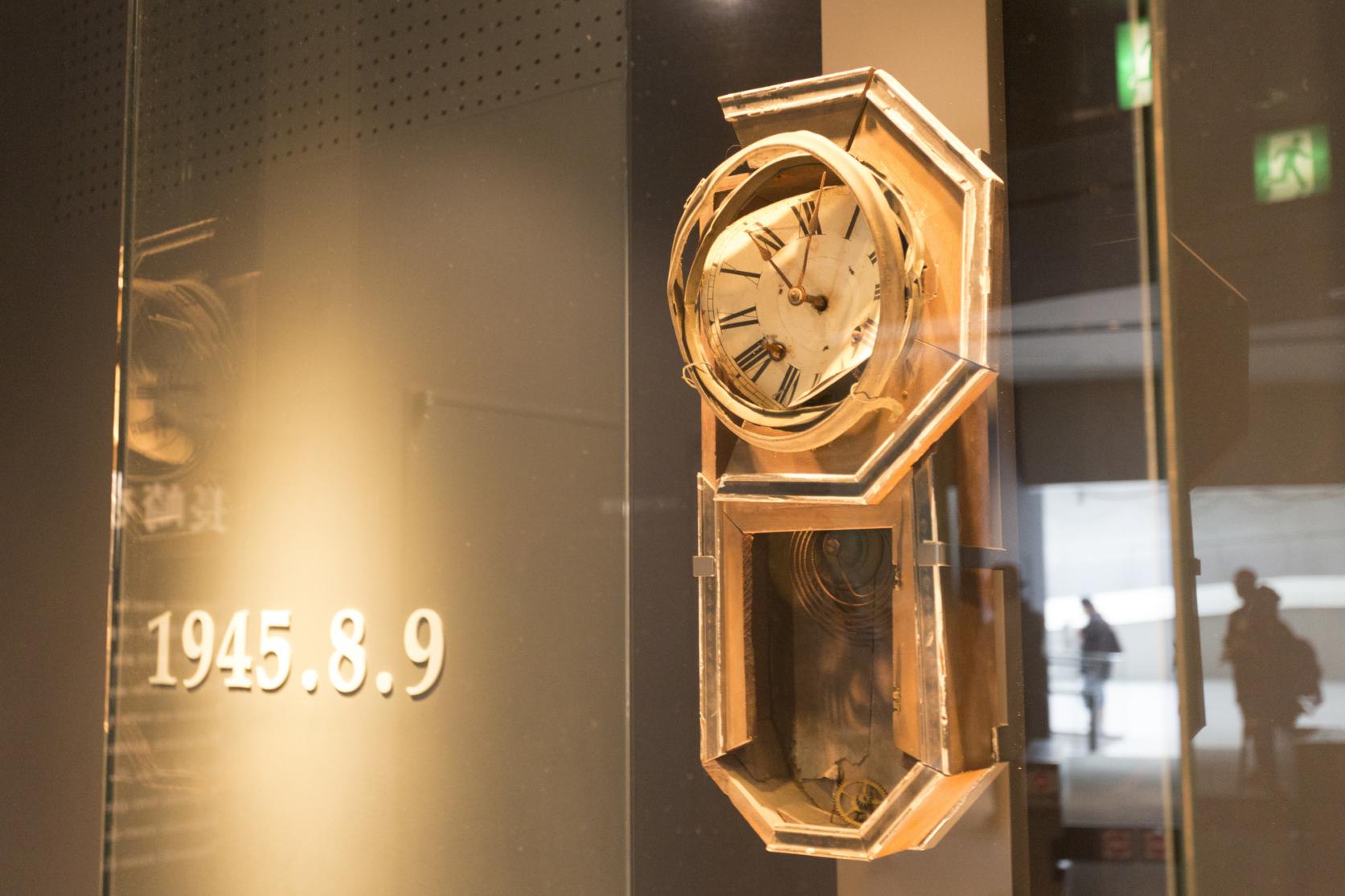 The Nagasaki Atomic Bomb Museum covers the history of this event in the accessible form of a story. It begins with the disastrous scene of the attack and includes the events leading up to the dropping of the atomic bomb, the reconstruction of Nagasaki up to the present day, the history of nuclear weapons development, and the hope for a peaceful world free of nuclear weapons.

Comparing the scenes of Nagasaki immediately after the bombing with the appearance of the city today, one cannot help but be impressed by the remarkable spirit of survival and the immutable strength of the people of Nagasaki. 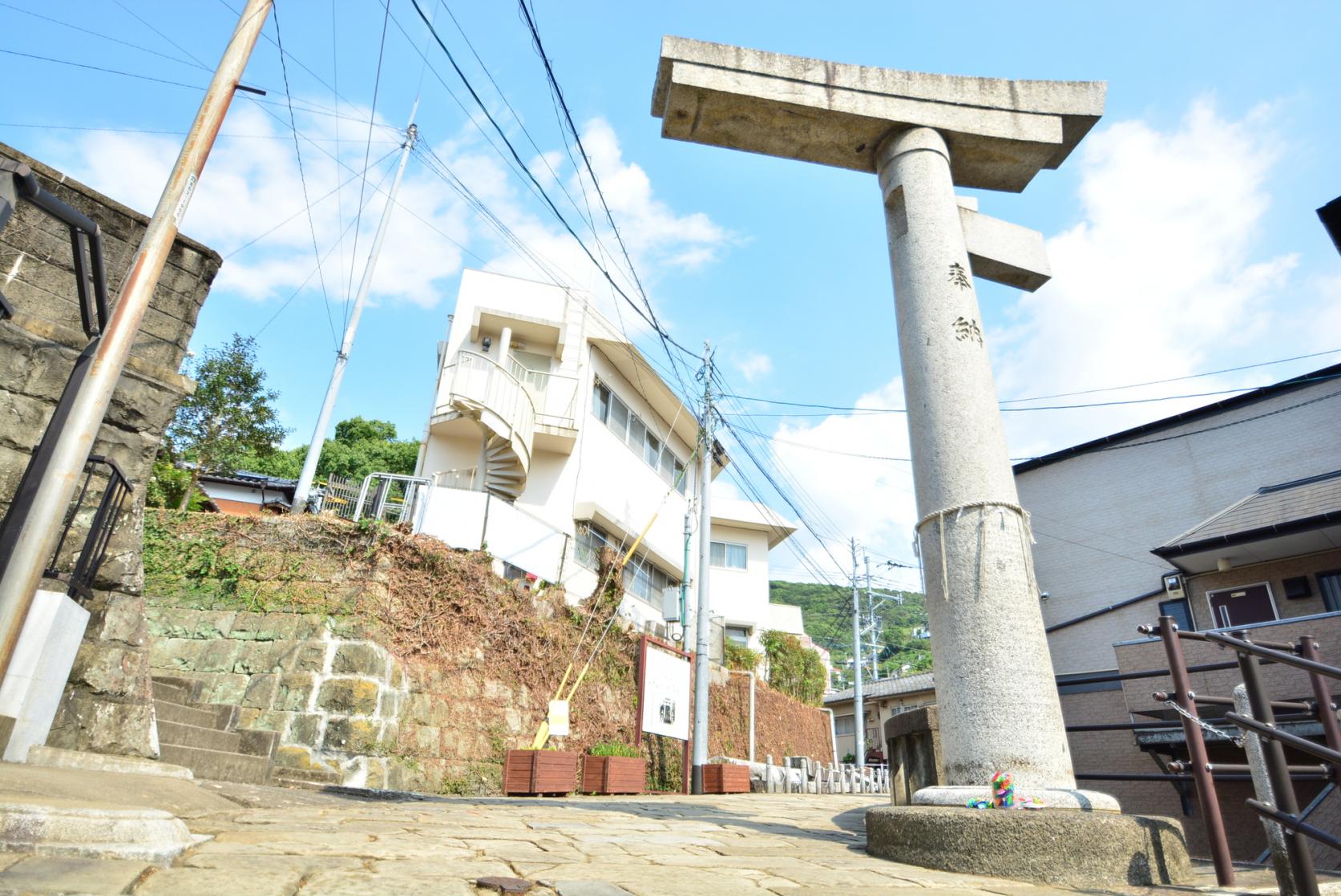 The Sanno Shrine, situated 900 m from the center of the blast, was instantly obliterated by the explosion and the 4000°C heat wave vaporized nearby trees. The only thing that remained is the torii arch standing on a single pillar, reminding us of the tragedy that took place.

A Catholic church visited by the Pope 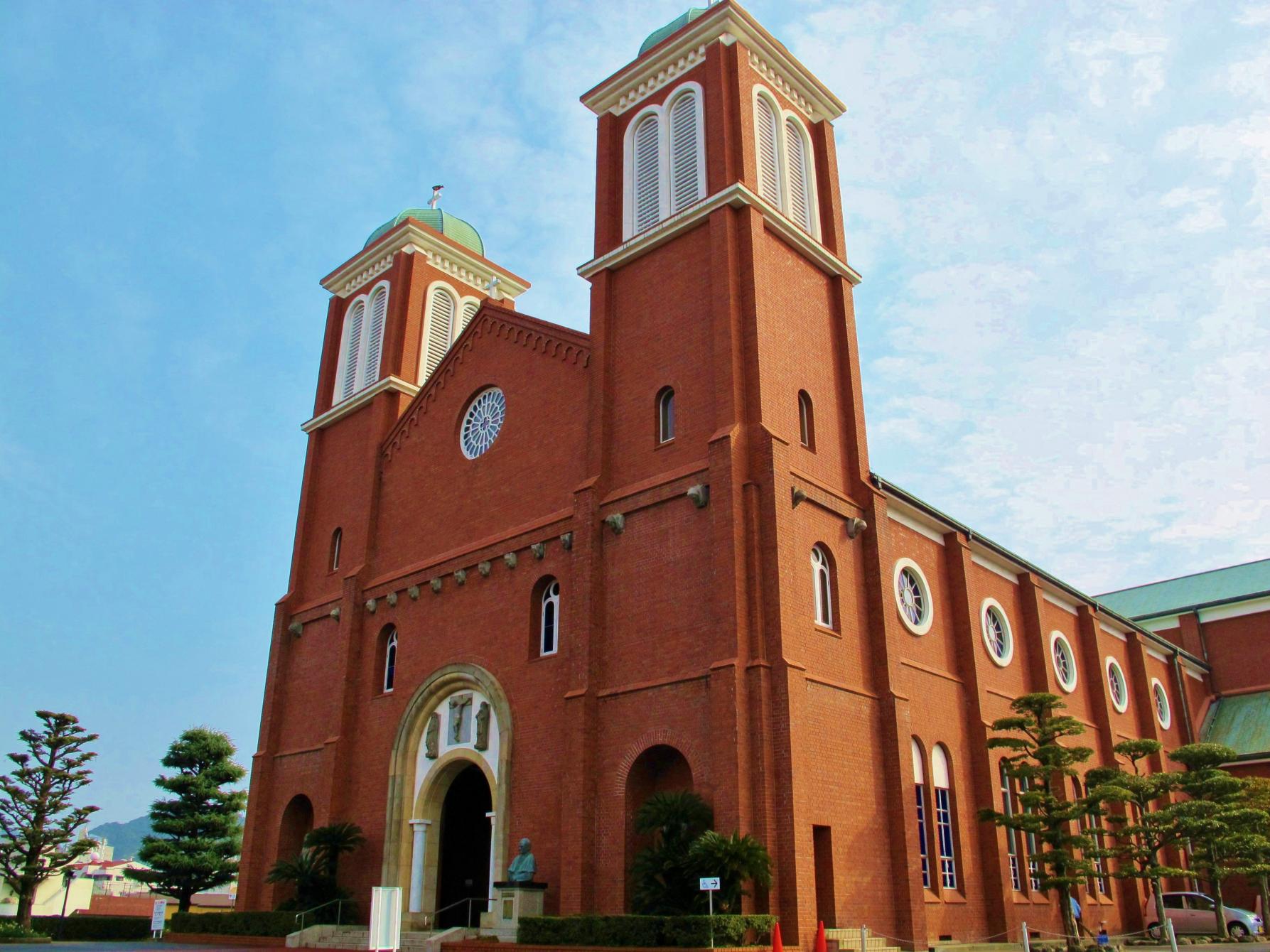 Suppression of Christianity was prohibited in 1873, and the newly free believers in Urakami planned this cathedral, which was completed in 1914. The best brick cathedral in the Orient, it was rebuilt after the destruction of the atomic bomb, then Pope John Paul II visited in 1981 and offered Mass. 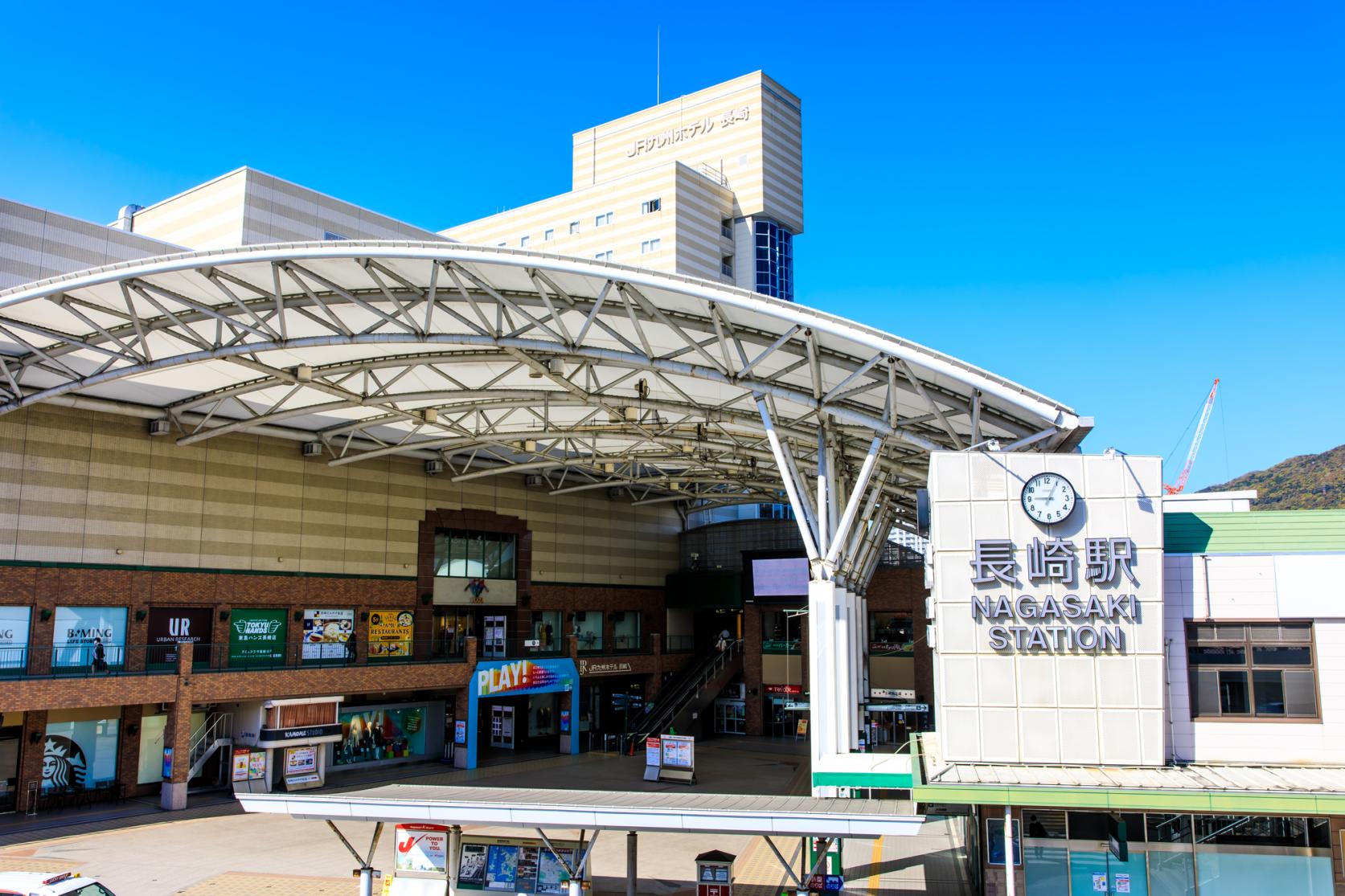