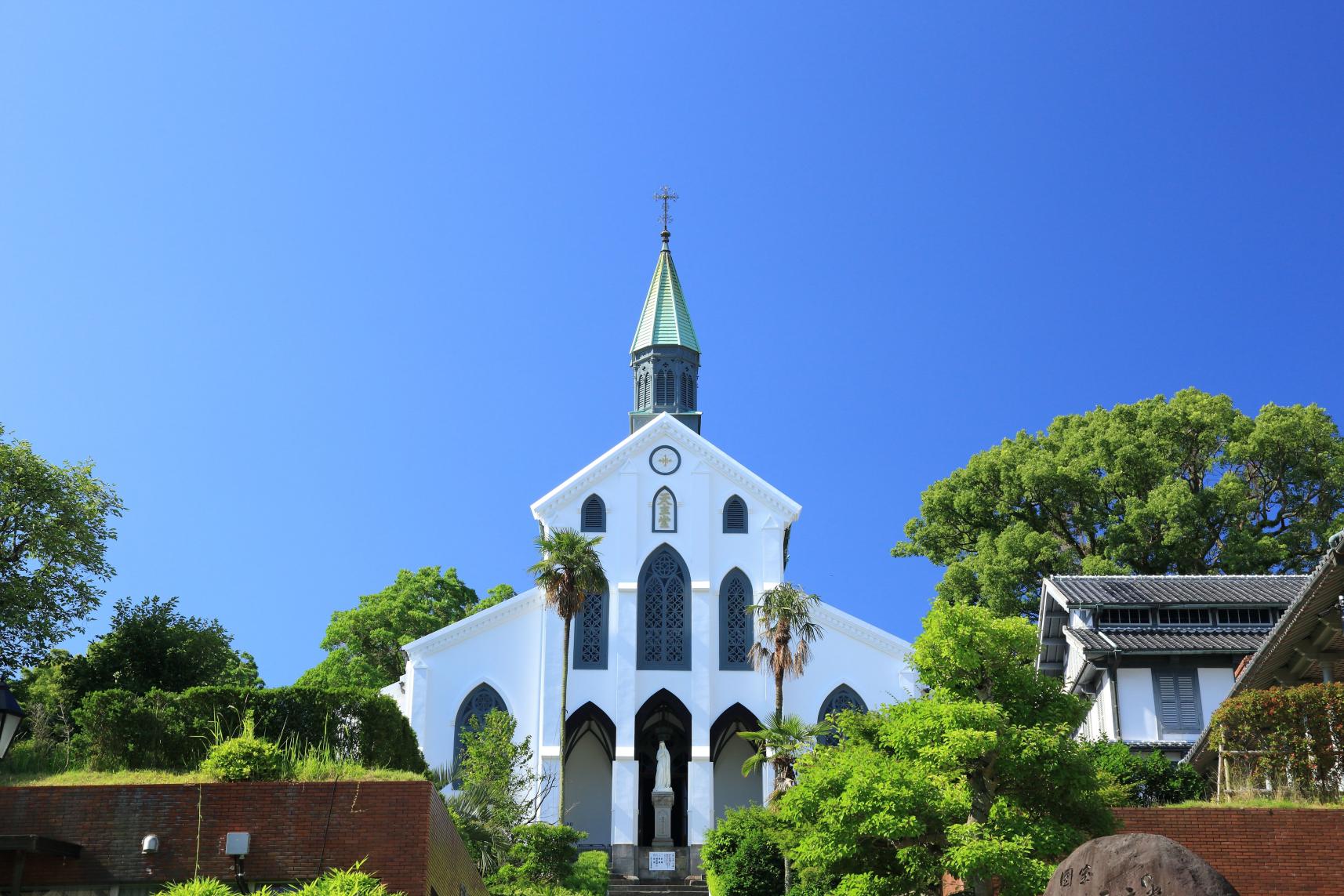 Located in the western part of Japan, the islands of Goto in Nagasaki Prefecture are full of lush green nature and gorgeous beaches. The simplicity of the island life, and the historical churches that dot across the landscape will move your heart in ways you cannot experience in big cities.

The Goto Islands are also steeped in Hidden Christian history. Despite harsh persecution of Christians in Japan during the 16th to 18th century, the faith of the Hidden Christians brought them through 250 years of hardship and hiding.

With this inspiring and moving history, the "Hidden Christian Sites in the Nagasaki Region" was inscribed as a UNESCO World Heritage Site in 2018.

In 2019, Pope Francis visited Japan, including Nagasaki, with "Protect All Life" as the theme of the tour. This was the first papal visit to Japan in 38 years since Pope John Paul II's visit in 1981. 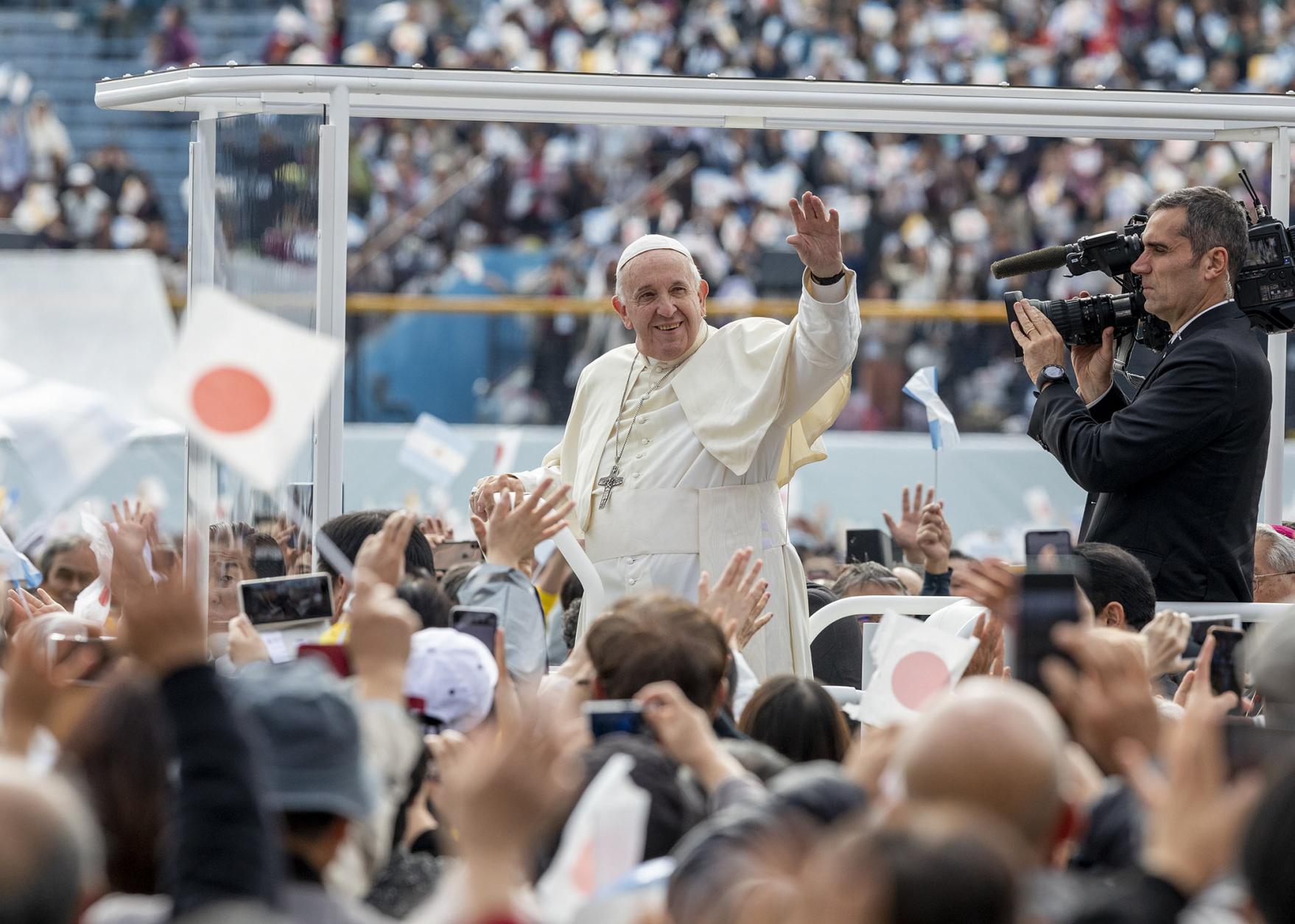 On November 24, 2019, Pope Francis visited Nagasaki under the theme “Protect All Life”. He visited the Twenty-Six Martyrs Monument and Museum, and the Nagasaki Hypocenter Park.

Pope Francis prayed for the victims of the atomic bombing, and also delivered a speech that emphasized on the importance of living in a world free of nuclear weapons.

Spots Related to the Pope

Oura Cathedral is the oldest wooden church of Gothic architecture existing in Japan. It was built in 1864 by a French missionary, and was thus known by the people of Nagasaki at the time as the “French Temple”. This church was dedicated to the 26 martyrs who had been executed on Nishizaka Hill; the bronze statues in Oura Cathedral and on Nishizaka were built to face each other. This church has been designated as a national treasure. One important story of this church is the “Discovery of the Flock”. In March 1865, hidden Christians from Urakami came to the cathedral and told the priest, Father Petitjean, that they were of the same faith as he was. When the Pope at the time heard the story of the Christian faith that had survived the centuries of harsh persecution, he was greatly moved and declared it to be the “Miracle in the East”.

Pope John Paul II visited this site in 1981.  This church was replaced with Urakami Cathderal as the Cathedral of the Nagasaki Archdiocese.  In 2016, it has been recognized by the Vatican as a Minor Basilica for its historical value.

Urakami Cathedral, located 500 meters north of the hypocenter. It was once renowned for being the largest Roman Catholic church in the East but was completely demolished by the nuclear blast. Now you can see the headless statues of the saints, the bell tower that was blown off by the atomic bomb and a wooden figure of the Virgin Mary which miraculously survived the heat of the nuclear blast.

More details:
In 1895, with the assistance of Fr. Pierre Fraineau MEP, the Christian faithful began the construction of Urakami Cathedral on the land o the former village headman, the very place where the custom of trampling on a Christian image (e-bumi), had been enforced as a way to expose hidden Christians.  In 1914, a ceremony was held to bless the church and dedicated it to the Virgin Mary. However, just 30 years later, on August 9th, 1945, the church was devastated by the atomic bomb. Nevertheless, on Christmas Eve that year, the survivors rang the church bell that they dug out of the ruins, and went on to rebuilt the church.

The new reinforced concrete building was completed in 1959, and an outer layer of bricks was added in 1980.  In 1962, meanwhile, the new Urakami church replaced Oura Catholic Church as the Cathedral of the Nagasaki Archdiocese.

The following monuments can be seen today in the precincts:
- The Atomic-Bombed Statue of Mary
- The Fallen Bell Tower: The original church had twin bell towers. One was crushed by the atomic explosion, another was blown about 25 meters away by the blast. It is preserved as National Important Asset at the original site.
- Headless Statues of Saints: Stone statues that were exposed to the atomic bombing.
- The Monument of Faith: Commemorating the 50th anniversary of Urakami Yonban Kuzure (the fourth collapse of the Christian community of Urakami resulting from the government's drastic policy of oppression and expulsion.)

Site of the Martyrdom of the 26 Saints of Japan

On February 5, 1597, twenty-six Catholics were executed here under the orders of Toyotomi Hideyoshi, marking the beginning of a two century long period of harsh Christian persecution in Japan. Today, this spot on Nishizaka Hill has been designated as a Japanese National Sanctuary. Pope St. John Paul II visited this site on February 26, 1981 as a pilgrim for the martyrs. Pope Francis also visited the Twenty-Six Martyrs Monument and the Twenty-Six Martyrs Museum on November 24, 2019. Before Pope Francis delivered his speech, he laid a wreath of flowers in front of the Twenty-Six Martyrs Monument, and then observed a moment of silent prayers to the martyrs.

The Twenty-Six Martyrs Museum
Behind the monument stands the Twenty-Six Martyrs Museum. At this museum, visitors can learn about the history of Christianity in Nagasaki - its rise, its prohibition, and its revival. A collection of items showcasing the lives of Christians as they hid from the authorities are on display here. These artifacts include the scroll Our Lady of the Snows (meticulously preserved by the faithful Hidden Christians in spite of the risk it posed), the "Maria Kannon" – a figurine shaped like the Buddhist Kannon used by Hidden Christians as the statue of Mary for worship, and personal belongings amongst others. There is also a collection of old maps and an original letter of St Francis Xavier's. A replica of the scroll of St. Mary of the Snows appears in the movie Silence (more information under Topics).

Twenty-Six Martyrs Memorial St. Philip's Church (Nishizaka Church)
Prominent for its uniquely designed twin towers that one may catch a glimpse of in the city area, this church, influenced by Gaudi and designed by Kenji Imai, is a church named after one of the martyrs. St. Paul Miki, St. Jacob Kisai, and St. John Goto's bones are stored here. This church is currently open for prayer and receives pilgrims from many nations every year.

On August 9th, 1945, an atomic bomb detonated 500 meters above Matsuyama in Nagasaki City at 11:02am. The area within a 2.5 kilometer radius of the hypocenter was utterly devastated, and the rest of the city was left in ruins. After the bombing, which destroyed all plant life around the hypocenter, people said that no plants would grow there for the next 75 years. However, one month after the atomic bombing, about 30 kinds of plants started to grow again. Today, there are about 500 cherry blossom trees in the Hypocenter Park, as well as flowers and lush greenery that can be seen throughout the year. It truly captures the power of revival.

On November 24, 2019, Pope Francis visited Nagasaki Hypocenter Park. Standing at ground zero of the atomic bombing, he laid a wreath of flowers, and gave his prayers to the victims of the bombing. In addition, he delivered a speech on the importance of living in a world free of nuclear weapons. The candles that he lit at the event is now being displayed at the Nagasaki Atomic Bomb Museum.

Background:
At 11:02am on August 9th, 1945, an atomic bomb was dropped on Nagasaki City. Large numbers of people were killed immediately, while others died later from illness or injury. By the end of December of 1945, approximately 74,000 people had died, and more than 75,000 people suffered from injuries associated with the atomic bombing.

In 1968, a memorial monolith was built in the hypocenter park to mark ground zero of the atomic explosion. Beside the monolith, a part of the relics of the former Urakami Cathedral is preserved. A layer of the ground at that time is exhibited at the site, where visitors can see the remains of destroyed houses: roof tiles, bricks, ceramic and pieces of glass that boiled in the 3000℃ atomic heat.

Other Related Sites:
Take a stroll around the many sites in the area: the Atomic Bomb Museum, the National Peace Memorial Hall for the Atomic Bomb Victims, the Peace Park, Urakami Cathedral with its atomic-bombed statue of the Virgin Mary, the Dr. Nagai Museum (a doctor and survivor of the atomic bombing), the local elementary school affected by the bombing with its own peace museum, the one-legged torii gate of Sanno Shrine and its surrounding camphor trees that survived the bombing. These are all located within walking distance.

The Nagasaki Atomic Bomb Museum covers the history of this event in the accessible form of a story. It begins with the disastrous scene of the attack and includes the events leading up to the dropping of the atomic bomb, the reconstruction of Nagasaki up to the present day, the history of nuclear weapons development, and the hope for a peaceful world free of nuclear weapons.

On November 24th, 2019, Pope Francis visited the Nagasaki Hypocenter Park. In addition to his prayers for the victims of the A-bomb, he also delivered a speech on the importance of having a world without nuclear weapons. The candles that he had lit up at the Hypocenter Park, along with his hand written message (in Italian) are on display at the Nagasaki Atomic Bomb Museum.